It was a cool summer day in July, a Sunday, skies looked gloomy at first, with a nice breeze.  What seemed to be a gloomy morning turned out to be a glorious afternoon for some tea.  Tea guests arrived promptly at 2pm (invitation via paperless post) ready to try all that the tea party had to offer.  Below gives a gist of the vibes and the ambiance of the fabulous tea party. Hopefully it provides you with some ideas for your next tea party.

Each table setting had it’s own color scheme. We wanted tea guests to embrace the colors of each cup, plate, charger, fork, and teaspoon. Each table was complimented by a bouquet of flowers which accentuated the tea ware placed on the table.  We also provided fans for tea guests for added decor.

Additives on the table were Belgium rock sugar and honey sticks. The intent was to have tea guests taste the tea for its organic flavors and not be so distracted by their sweeteners.

It was a summer day in July,  tea tasters needed refreshing teas that would hydrate and cool them down. So I started the day with Tazo’s Passion Tea mixed with fresh lemonade. Right next to it was Teavana’s Raspberry Limeade. 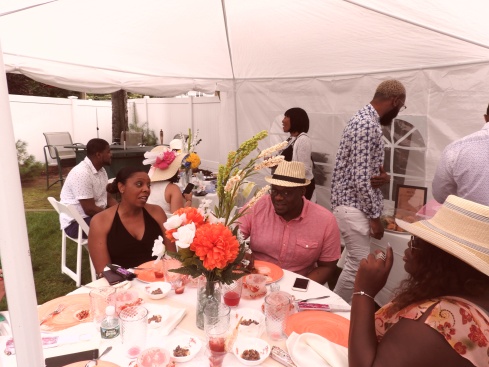 For those that wanted hot tea, I made Teavana’s pineapple kona pop with flowering pineapple as well as a separate kettle with Teavana’s peach tranquility.

In between the various tea tastings,  I first served a cajan shrimp cocktail to start, followed by turkey, ham, and roast beef croissant sandwiches, beef and veggie patties, and cheese straws. 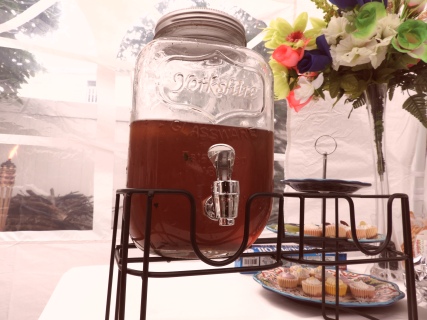 Thereafter, to top it off, for dessert I served fruits and Moore Flavors cheesecakes. We had the following flavors of cheesecakes: passionfruit, pineapple, apple crisp, peanut butter and jelly, guava, and caramel. Each mini cheesecake was to die for and married very well with the tea choices. 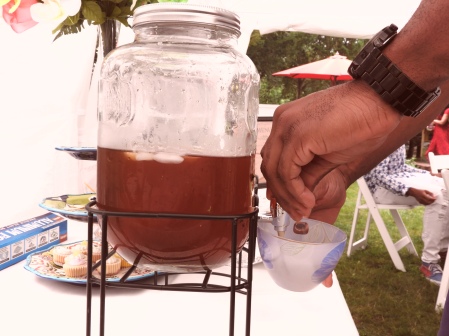 At around 4pm I served the second batch of teas. I started off with Bluebird’s G & Tea mixed with a gin cocktail.  After that was rapidly depleted, I followed up with a Bluebird’s Raspberry Russian and Bramble Ramble both combined with gin. However, I must say G & Tea was the crowd’s favorite.

This was just the first half of the day, stay tuned for next week’s post, where I will share with you all some of our tea party games!